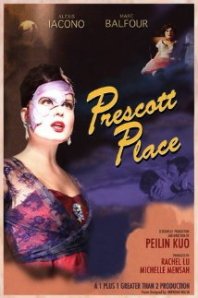 The engaging short “Prescott Place”  from director/writer Peilin Kuo evokes the feel of a 40’s melodrama as told through the lens of an episode of The Outer Limits or The Twilight Zone.  Alexis Iacono, in a dual role as damaged starlet Jane Prescott yearning for a next role and the return of her lover, communicates with and confides in her “Babydoll” (also Iacono) created in her likeness, which may have a life of its own.  Wearing an elegant partial Phantom of the Opera style mask to hide a set injury, the actress pines for lost stardom, holed up in the country manor of the title.

Along with its atmospheric black and white color palette, the look of the cinematography (by Lance Kaplan), production design, costumes, score, dialogue, and acting all contribute to a feel of period authenticity.  As in her strong work in The Black Dahlia Haunting, Iacono once again exhibits the timeless feel of a woman from another era with classic Hollywood glamor.  Sadness and possibly psychosis are on display as the actress Jane and an eerie, entertaining, and creepy deadpan delivery from the Babydoll is memorable as well.  While having shades of What Ever Happened to Baby Jane, the performances are not over the top.  This is great work from Iacono and it’s difficult to envision another actress in the role(s).
Marc Balfour is compelling and convincing as The Lover in his portrayal of a leading man/matinee idol from the era who has some shocking discoveries to make.
Twists and some dark humor come into play.  In a nice touch, the estate uses a dollhouse for its exterior shots and the house-as-prison metaphor is effective.  A startling injection of color, resembling lustrous Technicolor of the era, marks a transition with The Lover turning on a lamp switch.  Recommended for fans of film noir and anthology shows, “Prescott Place” is viewable for free at:  http://www.snagfilms.com/films/title/prescott_place
–Cory Graham@2013