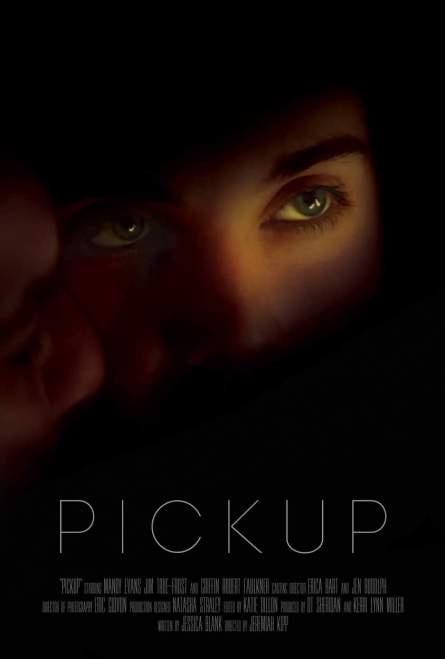 Pickup, a new dramatic short (directed by Jeremiah Kipp and written by Jessica Blank)  is dark, but also sheds light on lives in contemporary society.  Running a brisk 15 minutes,  this is a mature work exploring adult relationships and the impact of technology (texting, dating/hookup sites, attachment to devices) upon them.  Pickup is not uplifting, but is engaging and insightful throughout.  Its characters are human, flawed, and aching for more out of life.

At its center, it showcases Mandy Evans (who also produced) who compellingly plays Megan, a deeply unsatisfied young wife and mother.  This is a role and standout performance that should reap further opportunities for her.

The opening scene features commentary on the fleeting nature of fulfillment with Megan already planning the next Tinder encounter in the bed of her momentary partner, post-tryst.  The searching later continues alongside her husband in their marital bed.  Although ultimately unfulfilling, the quest for connection proves to have an addictive, alcoholic-like quality.

An especially telling scene has mother and son Liam sitting next to each other on the couch, each engrossed in phone or tablet.  The greatest human connection in the piece comes when the two take a break to share a playful, genuine moment apart from the devices.

The title can serve as a romantic liaison, as well as taking home a waiting son.  The duality and tension of desire/escape vs.responsibility/duty is central throughout.  Being seen as a less dependable parent (arriving late to Pre-K school one afternoon) is ultimately a greater blow than the potential revelation of infidelity.

I’ve long been a fan of Jeremiah Kipp.  This piece is more reminiscent of Soderbergh or Mike Nichols, than some of his more David Cronenberg-esque work.  It represents a wonderful accomplishment for all involved and features a fine score and cinematography. This short is quite masterful in its execution and writing.  It manages to be both raw and polished.  Pickup is a journey well worth taking.