I was really impressed with Catherine Parker’s work inhabiting Poppy Hill. We discussed The Haunting of Hill House–currently streaming on Netflix, working with director Mike Flanagan, as well as her past and future projects, including Doctor Sleep. –Cory Graham

How did the role of Poppy Hill come to you? Were you approached to audition?
I actually never auditioned to play Poppy. I did however, audition to play Nell and Joey. I’m very lucky and Mike went to bat for me, as he’s done many times before. When he told me about Poppy and handed me the script for Episode 9, “Screaming Meemies,” I felt like I had struck gold. I knew any part on that show would be a gift, but Poppy?!?  Poppy is like lightening in a bottle. The character flies off the page.

I feel that Mike Flanagan’s great strength (and what makes him one of the most interesting filmmakers working today) is how skillfully he’s able to interweave and balance human drama and psychological horror.
Yes. The real horrors of the world exist in our minds, don’t you think? Everything starts in the mind. I agree with you, but I’m most intrigued by Mike’s empathy. The well of that man’s heart is deep and I find THAT the most beautiful element of his filmmaking. Maybe it’s because I know him personally, but when I watch his films, it’s like watching his heart beat. There’s a very specific vibration going with a Flanagan film. He’s sentimental and loving and I think you feel that through his characters and even his camera angles. That’s why it’s so devastating when something awful happens to them!

Poppy has a distinct way of speaking. How was her voice developed?
The way she speaks is a play off of a mid-Atlantic accent. I watched a lot of old films with Clara Bow and Marion Davies. Those ladies were my inspiration.

Makeup, wardrobe, and hair were instrumental with her as well.
YES! Honestly, I didn’t really find Poppy until hair and make-up were done and I had that gorgeous dress on. I had lots of ideas about how I wanted to play her, but it all came together when the ensemble came together. Shout out to costume designer Lynn Falconer, head of make-up Staci Witt, make-up artist Erica Kyker, special effects make-up artist head Bob Kurtzman, and John Tarro who designed and styled my hair.

How long did it take to shoot your scenes for Hill House/how long did you work on the shoot?
I started working on Hill House in February of 2018, but didn’t do any scene work until the end of April 2018. It took about a day to shoot the scene in the Red Room and another few days to shoot the rest.

For me, the intersection of history and horror contributes a great deal to a ghost story. Was Poppy’s backstory something that was further discussed or that you developed yourself in working on the character?
Yeah! Mike and I talked a lot about her backstory and for a while there was a whole history segment on the Hills, but they ended up scrapping that part of the story line. I had a lot of freedom to come up with whatever fueled my performance. I like keeping that actor process stuff to myself 🙂

I had originally predicted that Carla Gugino would be nominated for Gerald’s Game and I am hopeful she may be for Hill House. You two share some very pivotal and powerful scenes. How would you describe working with her?
That woman deserves every actor honor given. She’s just a pro. It was like going to grad school working with Carla Gugino. She is so prepared, so kind, so smart, and strikingly beautiful. The woman is a class act and I am so grateful I got to work with her. I want to work with her again and again.

Having worked on four of his projects, other than the scale of the productions, has the dynamic of working with Mike Flanagan evolved/changed over time?
The only thing that has really changed is the amount of money behind the projects we have worked on together. Mike really trusts his actors to bring the characters to life. I’m always impressed by Mike’s warmth and patience with actors. He’s always been that way, since the beginning.

I was very excited to hear that you were already in production on a certain much anticipated project with iconic characters and an impressive cast. What can you say about Doctor Sleep?
Not very much! I CAN say that I’m playing Silent Sarey, a member of The True Knot.  Fantastic cast and crew! 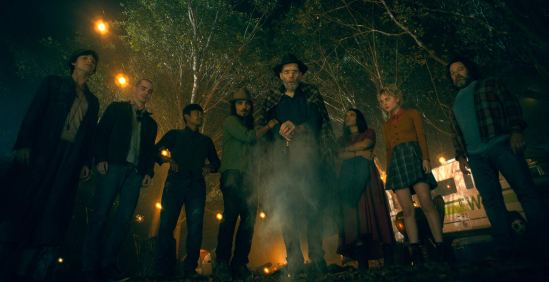 I’ve always found Christmas-set horror to be compelling. How was it working with the McKendrys and on All the Creatures Were Stirring?
The McKendrys are FANTASTIC. They work fast and efficiently. I haven’t seen the film yet and I’m really looking forward to it. Producer/Actor Morgan Peter Brown and Producer Joe Wicker both worked on Absentia, so I go way back with those guys.

At the time, Absentia was from a group of very talented and promising newcomers–and Doug Jones. It’s a remarkable little indie gem.
Haha! “And Doug Jones.” YES! We all couldn’t believe he said yes when we asked if he would come out and do a part in the film. That film was a Kickstarter campaign that snowballed into a proper movie! We shot Absentia in Mike’s apartment and his old neighborhood in Los Angeles almost 9 years ago. It’s been incredible to witness his rise to where he’s at now.

Halt and Catch Fire was an underrated favorite series of mine. What memories do you have of your experience on it?
Me too. I was really excited to get to speak Japanese in my scenes. I grew up going to a Japanese immersion program as a kid and it was exciting to interweave acting with that language. I’d like to do that more.

Are there particular types of projects or roles that you haven’t explored that intrigue you?
I love working on period pieces and I’d love to work on a comedy and I want to get back on stage as well!

I’m definitely looking forward to your new projects. Thanks so much for your time!
Thank you, Cory!